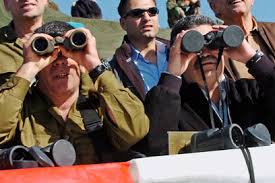 Just in case anyone thinks I am politically motivated to expose Labor, Likud and Shas shortcomings, I am now reporting on a just published decision of moral rights infringement by the Meretz party which has what some might call a ‘politically correct’ manifesto.

On 16 December 2012, Ephraim Shrir sued Meretz for 70,000 Shekels for copyright infringement by posting Shrir’s iconic picture of Amir Peretz peering intelligently through a lens capped pair of binoculars whilst ‘observing’ a military exercise on 21 February 2007, in the elections for the 19th Knesset.

Ephraim Shrir is a photo-journalist. Meretz used the photo on their website, posters and advertising in their political campaign and also photo-montaged parts of the image onto other candidates. Shrir alleged that his economic and moral rights were infringed by Meretz failing to get permission and failing to acknowledge the photographer’s identity. He muscled in on Meretz, suing for 70,000 Shekels. Furthermore, Shrir’s lawyers sent a Cease & Desist letter which was ignored, and thus Meretz cannot claim that they were unaware.

Meretz claimed that Shrir had not proved that he had rights in the image. Shrir countered that the commercial rights were owned by the daily paper Idiot Acharonot, but, citing Section 34 of the Copyight Act 2007, he nevertheless held the moral rights.

Meretz claimed that as the picture was taken in 2007, before the Copyright Act 2007 entered into force, the case should be thrown out. They also claimed that the picture was never reproduced as is, but was always part of a photo-montage with other members of Yzippy Livni’s party Hatnua. Since the photo-montage was a new image that wasn’t significantly based on Shrir’s photo, it was a derivative work and could not be considered as illegitimate under Section 11 of the Law. Alternatively, the Court could accept that Section 11 was infringed, but due to Section 19 allowing critical review and brief citation, the usage should be declared legitimate.

Meretz further claimed to have taken down the image from their Facebook page sometime between 5december 2012 and 7 December 2012, prior to and independently of receiving the Cease & Desist letter. Meretz denied using the image in posters and flyers and maintained that usage was limited to their Facebook page. Since Meretz is not a profit making organization, it denied that its usage could be considered commercial.

In summary, even if there was an infringement, the short time that the image was on Facebook, the lack of political profit, the fact that the use was non-commercial and that it was there to create critical public thought combine to create a situation that the damages are negligible.

The case was brought in the Afula District Court before Judge Shaden Nashaf Abu Achmed.

Judge Abu Achmed noted that Section 78a of the Copyright Law states clearly that the new Law applies to creations that precede it coming into effect apart from the duration of rights and the ownership issue which are covered by the Copyright Ordinance 1911. She considered that as far as the general economic rights were concerned, Shrir’s photograph was work for hire, and was owned by Idiot Acharonot and he had no standing as a plaintiff. However, as far as moral rights were concerned, these are non-transferable and so Shrir was entitled to sue. She also dismissed Shrir’s allegations that addressing the issue of copyright ownership was a broadening of Meretz’ defence. I was rather impressed that she quoted the underlining principle of Hebrew Law: Babylonian Talmud Baba Kama 46:1 that “the onus is on the plaintiff to prove his case”.

Shrir’s dismissed the fair use defenses. Judge Abu Achmed accepted that Shrir’s moral rights were compromised and then ascertained the damage and compensation.

Of interest, Judge Abu Achmed considered that the moral rights were not only that of being identified as the photographer, but also accepted that the photo-editing, which included the image being laterally inverted and Peretz’ arms and the binoculars being photo-shopped onto the bodies of other politicians was also an infringement of his moral rights. She also accepted his concerns that the picture could compromise him by causing him to be identified with the political party and their agenda.

In assessing the damages and compensation Judge Abu Achmed noted that the relevant law provides up to 100,000 Shekels without proof of damages, but provides the court with considerable leeway in ruling lower sums. The judge considered the extent of the usage, the time period, the actual damage caused and the need to deter similar infringements. She seems to have been impressed that the Facebook post garnered 100 ‘likes’. Ultimately, however, there was one image that was posted once on one Facebook page which was shared once. This can only be considered as one infringement. Although the photographer did not accept the time-frame, the judge felt that defendant was correct that the image was in use for a few days. The photographer himself testified that where Idiot Acharonot allowed him to resell a picture, the going rate was 100 – 150 Shekels. Then again, in this instance, the defendant is a political party which helps legislate laws. Meretz has legal advisors and they claim to have procedures for obtaining permission to use copyright material. No satisfactory explanation was given why these procedures were not used in this case. It was difficult to show that Meretz actually gained or lost Knesset seats as a result of usage of the image. The judge did not accept significant inequitable behaviour as the image was taken down and wasn’t reused. Taking into account all these aspects, the judge ruled that Meretz should compensate Shrir 14,000 Shekels and a further 3000 Shekels legal expenses.

Section 46 (2) of the Copyright Law 2007 states that moral rights provides that no distortion shall be made of a work, nor mutilation or other modification, or any other derogatory act in relation to the work, where any aforesaid act would be prejudicial to creator’s honor or reputation.

The Fair Use exception of Section 19 only states that “Fair use of a work is permitted for purposes such as: private study, research, criticism, review, journalistic reporting, quotation, or instruction and examination by an educational institution.

The critical review defense raised by Meretz had as much chance of flying as pigs have. The correct defense was satire. This is not listed in Section 19, but the list of fair use exceptions is open-ended. In the US, Europe and elsewhere, satirical use is considered fair use. (In Europe, the Judge apparently has to find it amusing, and with most Israeli judges appearing to be aligned with Meretz, one wonders how that would play out here.

Different creations have different degrees of creativity. In journalistic images the creativity is not supposed to be in directing those photographed to pose in a certain manner (although many iconic images of the Arab-Israel conflict are staged).

Shrir is not the creator of Amir Peretz peering through binoculars with the lens caps on any more than he is responsible for Peretz’ iconic mustache.

To the extent that Shrir has rights, these are in the angle, lighting, and the like. There may be moral rights preventing an image being edited, but I don’t think these are significant. If Yediot had cropped the image or altered the contrast, I don’t think Shrir could have claimed that his moral rights were compromised.

I don’t think that satirical usage is derogatory or prejudicial to the original creator’s honor or reputation. I don’t accept that the photographer’s right to integrity in an image should extend to satire, and positioning Peretz’ hands on a different politician is simply that. I think the original picture is well-known and having Peretz blindly looking to the (political) right is also satire (albeit too subtle for Israeli politics) and should be allowable. Indeed, I am not sure that these changes don’t over-ride the moral rights of the photographer completely since the creative aspects of the image such as the lighting and angle are immaterial. I also do not accept that use of a well-known image of this nature identifies the photographer with the political party using the image. There is a world of difference between a popular song and singer being used in a political campaign which may imply that the singer / songwriter supports the agenda, and a photograph of an event five years earlier, which does not imply an endorsement by the photographer.

It seems that Meretz rather stupidly raised the fair use defense that their material was a review. In my opinion, more germane to the case, and rather more interesting is the defense that the usage of the image was satirical. Clearly their using Peretz in their campaign was satirical. I don’t know if this defense is sufficient, but it is what the case should have been about and there is a need for a ruling on the subject. As Meretz’ lawyers didn’t raise the issue, I don’t think the judge could fairly have addressed it.

I am also highly skeptical of Meretz’ argument that the use was non-commercial. I accept that political parties all have agendas for furthering the public good as they see it. I am less convinced that politicians are motivated by altruistic motives. That as may be, parties are allocated public funds and raise donations. Even if we ignore the alarmingly large extent that non-elected officials are selected due to their political affiliations, we can agree that party officials and certainly city mayors, Knesset members and ministers are paid employees so Meretz, like other parties, should be considered as being a commercial entity.

Ironically, Israel may be one of the very few countries in the Middle East where an Arab woman could be appointed a court judge.

I find troubling Meretz’ claim that the date by which an image is created and not the date of infringement is the date that determines whether the Israel Copyright Act or the Copyright Ordinance is the applicable law applies. This position, though creative, is untenable and one would assume that legislators would have more sensitivity to the fine points of the law.

I have posted the picture before when Shrir sued Walla, however, the photo is such a good one, I am reposting. It would be amusing except that people have been killed in actions that resulted from Hizbolla and Hamas assuming that Israel’s defense is in the hands of incompetents.