On Friday, I visited the historic Jewish quarter in the medieval town where the roads are somewhat narrower.

The Synagogue of the Rashba has been turned into a little museum, and the sites of other synagogues have been identified. A store selling indoor furnishings and ornaments has a medieval ritual pool (mikveh) in its floor. 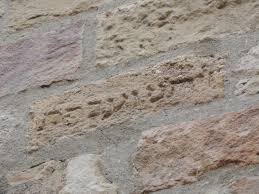 We saw the site where Nachmanides debated Pablo Christiani on theology before King Jaume, and saw a municipal building that included recycled tomb-stones from the Mount-Juic cemetery as part of the stone-cladding, the Hebrew lettering still visible.

Together with other observant Jewish IP practitioners from Australia, Israel, Canada, UK and the United States, we spent Shabbat (Saturday) with a community of Moroccan immigrants served by Chabad rabbis. It seems that now as in pre 1492, the synagogues are inconspicuous from the outside and communal life relies on the goodwill of the government. Outside the synagogue  whose only external sign was the mezuzah on the doorpost, police security was clearly evident. That said, whereas in Paris and to a lesser extent, in Brussels, I encountered anti-Semitism, I felt very comfortable wandering about Barcelona in a kipa (skullcap).

On Wednesday, thoroughly fed up of patent and trademark attorneys, I joined my wife Miri on a day trip to the historic town of Girona.